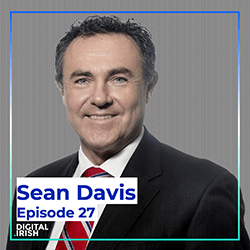 Sean Davis is the New York based Enterprise Ireland Regional Director for the Americas, taking up the post in August 2016, leading a team based in 9 offices across North & South America.

This followed a 5-year posting as the Enterprise Ireland Regional Director MENA based in Dubai, from 2012 to 2016.

From 2006 to 2012 he managed the Enterprise Ireland Cleantech, Industrial & Life Sciences team, based in New York.

From 2002 to 2006 he was the Market Development Manager for the US and Canada with the US subsidiary of the publicly traded Singaporean company Asia Pacific Breweries Ltd, managing market teams in New York, Boston, Atlanta, Miami, and, sales agents in Montreal, Toronto, Calgary and Vancouver.

Sean was an owner and GM of an import company in New York City from 1999 to 2001, and, owner of a Brooklyn, NY based bar/restaurant from 2001 to 2013. He spent 10 years in Ireland with the Irish retail chain Superquinn in a variety of management roles before relocating to the US in 1996.

He holds a diploma in Management (DIT), Marketing (DIT) and has a degree in Business Studies from the University of Glamorgan.

This episode is hosted by Dave Byrne.