Irish & New York professionals were treated to an event with leading speakers in Blockchain technology on November 8th. Cristina Dolan — founder and CEO of InsideChains and COO and co-founder iXledger — provided insight into the transformation potential of blockchain before three Irish companies presented how they transform different industries using blockchain technology.

You can catch a copy of the event here (with our apologies for audio quality issues) as well as a round up of information and the pitching companies below:

Why Blockchain Will Change The World

You probably heard that Blockchain will disrupt every industry right? Why you ask? The need for trust.

“Trust is slowing down the economy, people have to enter legal agreements and employ people to double check or verify transactions” – Cristina Dolan

These are only some of the trust issues inherent in international banking. As a result, banks need to use resources and third parties to verify transactions. As a result, it takes days to transfer funds abroad and the customers incur significant transaction fees.

What if we could use technology to establish trust in this example?

Blockchain technology may be the answer to these trust problems. Blockchain technology enables parties to instantly verify who they are entering a transaction with and whether the other party is authorized to do so. Still not convinced? Cristina Dolan, Chair of the MIT Enterprise Forum of NYC, an internet pioneer & blockchain expert highlighted the progress of blockchain technology: “Bitcoin, as of today, has a larger market cap than Goldman Sachs and has more users than the population of many countries”.

What is the difference between Blockchain and Bitcoin?

People may have heard blockchain and bitcoin used interchangeably: “You cannot talk about Blockchain without mentioning Bitcoin”. This is because blockchain is the technology that enables people to instantly transfer bitcoin across the globe. In a transfer of bitcoin, blockchain technology enables parties to trust that the other party has sufficient funds and to verify that they are who they say they are. Some of the strongest proponents of blockchain believe it will transform (or replace) the banking system of the future.

There are exciting Irish companies leading the development of Blockchain in various industries and the Digital Irish community learned of how their applications establish trust for stakeholders. 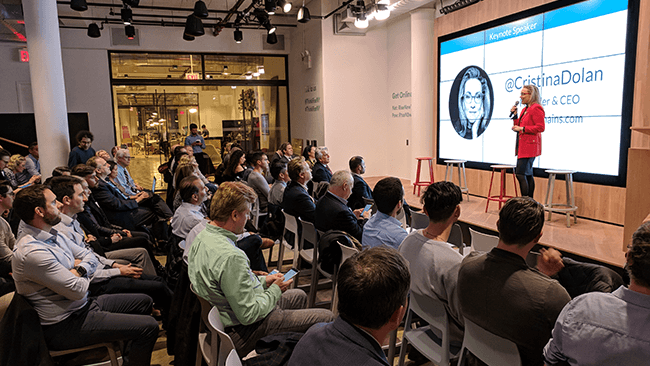 Do you “TRUST” where your food or drink is sourced?

Arc-Net, a company based in Belfast, were the first company to apply block chain technology  for supply change management. Over the last few years, there has been numerous scandals in the food industry. One prime example is the Honeygate scandal where consumers thought that they were buying real honey from Europe when it was actually fake honey from Asia.

Brendan Symth, Chief Development Officer of Arc-Net.io quantified the problem further. “Three people per day die in the US due to poor supply chain management in pharmaceuticals” and added that “each household in the UK spends $700 per year on falsely advertised food’.

Arc-Net uses blockchain technology to enable companies and customers verify where ingredients were sourced and provide complete transparency throughout the supply chain (“From farm to fork”). The company recently raised a 3 million funding round and works with leading food and drink brands. They were awarded with the “Startup of the Year Award” at the 2017 Digital DNA Awards. The company has also been selected for multi-million-pound EU-China food safety project.

How can charities & donors ensure that the appropriate parties are benefiting from donations?

Niall Dennehy, COO of AID-Tech, explained how they use blockchain to support charties across the world support people in need. “Our aim is to provide digital identities to the 2.4 billion undocumented people around the world.” AID TECH, who partnered with RedCross and the UN,  work with governments and NGOs to increase efficiency in the flow of funds and welfare services, as well as to make the process of receiving donations more transparent, traceable, and immutable. 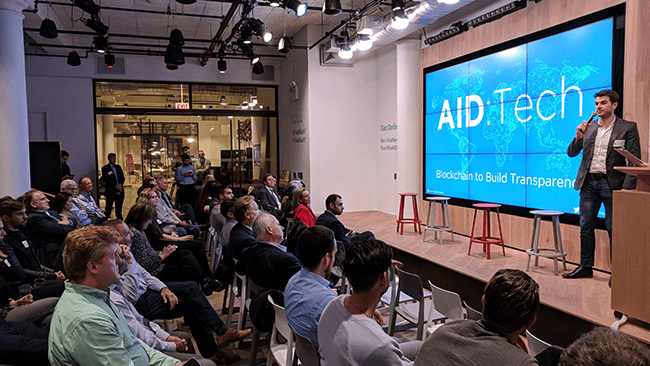 They entered a pilot program with Red Cross which provided Syrian refugees with vouchers to buy goods and services whilst enabling Red Cross and donors trace where their money went real time. The company has won numerous awards including the IBM #1 Global Start Up 2017 award and were recently presented with the “CITI – James Wolfensohn Game Changer Award” by Managing Director of the IMF, Christine Lagarde.

The financial crises broke the public’s trust in the banking system. As a result, financial institutions have come under increased scrutiny and are subject to onerous regulatory requirements. Compliance and legal costs have soared and limited the ability of organizations to operate in certain markets.

Shane Brett, CEO of GECKO Governance, explained the importance of being able to demonstrate compliance to the regulator. “A bank may be compliant, but if they can’t prove it, they could still incur massive fines”. Transparency and traceability are key. 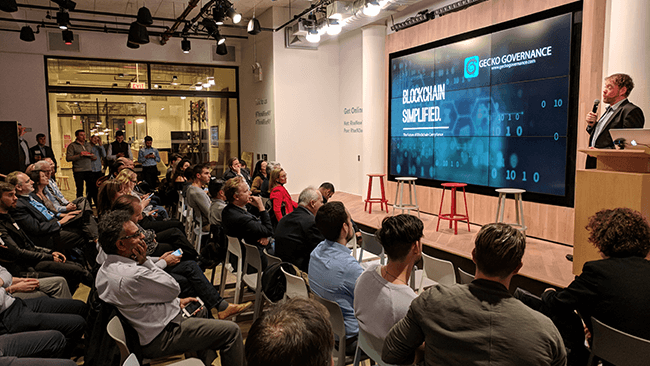 GECKO Governance is the first RegTech blockchain solution to enable fund managers and banks have complete and instantaneous visibility into all the processes taken to remain compliant. The system is used to support organizations comply with multiple onerous regulatory requirements (like Anti Money Laundering regulations) and to monitor compliance in real time. In addition, regulators have access to complete audit trails. This reduces legals costs incurred during regulatory audits and reduces the risk of penalties which would have a significant impact on the reputation of an organization.

Blockchain will transform industries and how we live our day to day lives. Irish companies are leading that transformation.