For Irish startups going international, cracking the lucrative US market is an intoxicating prospect. But just gaining access in the first place can be sobering. It’s hard to meet the right people. To convince them cold to invest their time, market expertise, and ultimately their capital in your venture is harder still. So having a network becomes vital in an arena where simply offering a viable, growable business is a bare necessity.

Since 2013, Digital Irish have worked to make those connections. An active network of Irish professionals in the city, they boast a substantive Rolodex and literally exist to connect. It turns out an Irish affinity is a valuable thing. I spoke to founder Feargall Kenny about his experiences working in the US, and ultimately how Digital Irish evolved from his lessons learnt.

Feargall left Ireland for New York in 1994. A year shy of the Celtic Tiger, he counts himself among the last of the Irish to emigrate with true economic motive pre-2008. ‘It was probably the last year there was a serious challenge for graduates to get work’. London beckoned – for him and most of his peers – but chance intervened. On winning the Morrison Visa Lottery, he tentatively flew stateside instead, resolving to stay ‘at least for a year’.

Unsurprisingly, Feargall’s career trajectory was heavily affected by the dual energies of tech innovation and networking prowess that now underpin Digital Irish. Getting his start in sales, his first company, a storage startup, was acquired. His second, Boxhill, went public. This all made for gratifying early exposure to the rush of the tech exit. And later, when his own first venture floundered, it was the connections he retrieved from its embers that jump started his follow up venture.

‘It set me up with the connections that help me succeed today in recruiting…I setup my own recruiting firm, Glenborn, that focuses on sales hires for VC-backed startups in marketing, commerce and publishing technology. This has been a very successful venture for me. I am now eight years in and loving it’.

While enjoying this personal success in the US, Feargall retained an interest in making connections for other expats and Irish-Americans. ‘Having spent years in tech sales, I saw first hand the power of being able to leverage my Irish heritage…about five years ago I thought there was suddenly a critical mass of Irish startups coming to the NYC. I wanted to see if I could widen the net of connections for them by offering them a pitching forum to other Irish people that I knew were connectors by nature’. Oisin Hanrahan, Founder & CEO of Handy, provided the venue and Digital Irish was born. 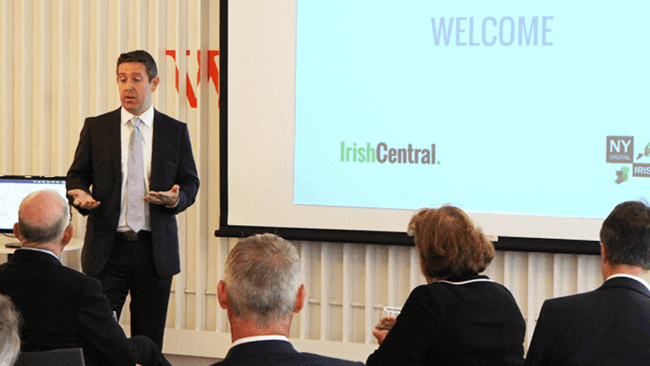 Four and a half years on and 110 Irish startups have pitched at Digital Irish events (which are run every two months). ‘We get between 80 and 200 people at these events, and now front the pitches with panels and other educational segments around specific themes like Blockchain, AR/VR, fintech and healthcare tech. We have over 1500 members on LinkedIn and a mailing list of 2500 people’. Sponsorship based, its operations are overseen by a board of seven.

So what do Irish startups stand to gain pitching to Digital Irish? ‘The core benefit is that we can help make connections for you in the Irish and wider expat community – across customers, partners, service providers, VCs and angels. We help you to identify people who are predisposed to trying to help you out and/or offer friendly advice’.

As well as connecting companies with capital, Digital Irish has itself evolved an investment arm with a focus on deals that already have an Irish VC lead. ‘We’ve invested in four Irish startups including VideoElephant, Brightflag and LikeCharity’. Affinity-based investment groups have become part of the furniture in New York. Digital Irish Angels operates in much the same spirit: tapping a given community for the best and brightest entrepreneurs and companies it has to offer. Angel investing is a high risk asset class, so the affirmation from doing something for your own community offers an early return where monetarily there may not be.

So US-bound entrepreneurs take note: Digital Irish are most interested in startups demonstrably ready for expansion to the US ‘with the commitment and funding to follow that through’. Industry-wise? ‘NY is home to many verticals such as agencies, brands, retailers, fashion, pharma and finance so we are generally better positioned to help startups aligned to those verticals’. In essence, they seek to be a foothold from which to scale those verticals.

When asked if November’s election of a protectionist president has deterred European companies from coming, Feargall demurs. He points out, quite astutely, that if that is the case then ‘all the more reason to get in on the ground here and take on the spoils of a 250 million population market’. Indeed; a vast market of notably less country-brand loyal consumers, and relatively homogeneous compared to Europe too he notes. Presidents come and go. There is no doubt however that potential restrictions on founder visas will have a major effect on European entrepreneurial activity here.

Digital Irish also assist young Irish professionals on their arrival in the city. Wall or no wall, between category L (transfer), O (special skills), J (exchange) and H (sponsorship) visas, the Irish remain relatively well catered for. Empathetic to the daunting position of being a new arrival, Feargall offers practical advice: decide specifically what it is you want to do in terms of industry and role, seek out mentors to guide you as to earning potential of each of the potential functional and industry choices you have, follow up with the connections you make and don’t be afraid to be the squeaky wheel in your company once employed to help climb that ladder.

Going forward, Digital Irish wish to do more for Irish companies prior to their arrival. Using their growing social presence and content marketing team, they can publicize between events the companies arriving and what their ‘asks’ are from a connection standpoint. ‘We want Irish startups to be able to leverage this before they make a trip so they can maximize the use of their time here’.

So the Digital Irish ask is this: if you are a company with eyes only for America and you believe Digital Irish can be of assistance, connect with them now, before your arrival. On the ground, time is most certainly money. But in advance, they can get your company out there digitally in New York. Right across the city the old maxim rings true: it’s not what you know, but whom. You could be wise getting to know Digital Irish.