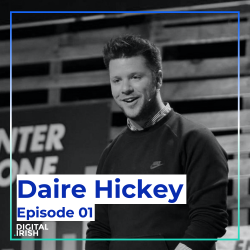 At a time when the Irish economy was at it’s lowest point Daire Hickey along with his two co-founders managed to draw some of the largest names in Silicon Valley and the world’s business media attention to Dublin for a gathering of tech entrepreneurs called Web Summit. That gathering would grow into the largest tech conference in Europe and become labelled as the ‘Davos for Geeks’. In 2017 Daire left Web Summit to launch 150 Bond and gives us an insight into his company which has an intentionally discreet online presence.

We also hear from two Irish startups in the FinTech Space:

Alan Meaney, CEO of FundRecs explains why Ireland is such an important hub for the funds industry and tells us about his recent move to New York to expand the companies footprint in the US.

Tiernan Kennedy, CEO of UMBA, which is a micro-loan and finance services company in Kenya, gives a really interesting insight into the hyper growth of FinTech in the Kenyan and broader East African market.