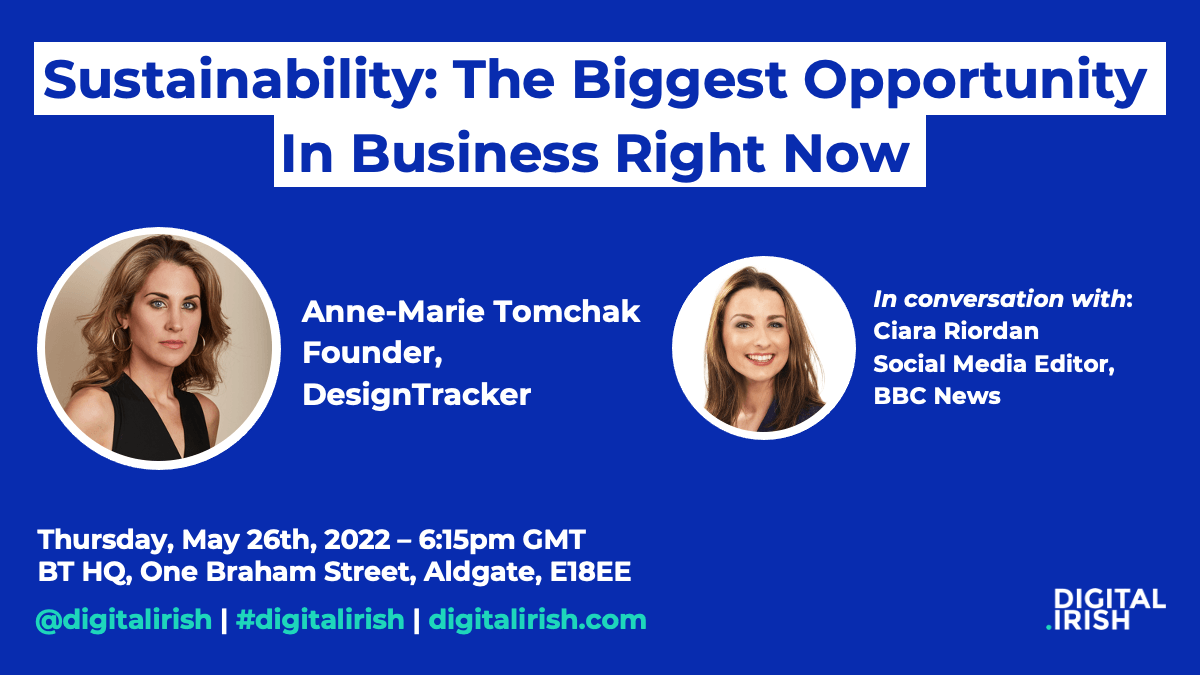 Join us on Thursday May 26 at 6:15pm at BT HQ in London for a fireside chat and drinks with Anne-Marie Tomchak to hear about how sustainability is changing the face of business. There will also be a showcase of some top startups in sustainability.

Since starting out as a journalist in RTE almost 20 years ago, Anne-Marie has been an innovator across news, technology and fashion. She launched the social media investigative unit BBC Trending, she has led editorial teams at Mashable and British Vogue and her television documentary work is on the Irish curriculum.

Now Anne-Marie is part of a new wave of impact entrepreneurs bringing fresh thinking to the way we engage with sustainability. Her company DesignTracker helps people decarbonise their homes – something that must happen for the UK to meet climate targets. She’s also a co-founder of the circular fashion non-profit ShareJoy which sells preloved clothing to raise funds for mental health charities.

This chat with Anne-Marie will look at how technology and fashion are contributing to the future of the planet and how optimists from a range of backgrounds can help solve the world’s biggest problem and transform business as we know it.

Anne-Marie will be in conversation with Ciara Riordan who is a Social Media Editor at the BBC and an award winning journalist, presenter and producer. She previously interviewed Sir David Attenborough and this went viral when she asked him what animal he would be for a day! (Answer: A sloth!).

Doors Open at 6:15pm with registration and drinks. Doors closing at 7pm when the event will start.

Anne-Marie Tomchak is the founder of the social enterprises DesignTracker (which helps people decarbonise their homes) and ShareJoy (which sells pre-loved fashion to support mental health charities). She’s also a contributing editor for the Condé Nast title Glamour UK and a climate columnist for Ireland’s most read newspaper the Irish Independent.

Anne-Marie has led teams at British Vogue and Mashable and has worked with the world’s most internationally recognized brands including: Microsoft, Snapchat, Apple, Harvey Nichols, BMW, Salesforce, Ralph Lauren, Jimmy Choo, One Young World, the International Rescue Committee, among many others.

An accomplished multi-platform journalist and editor, Anne-Marie spent over a decade in news media with RTE in Dublin and the BBC in London where she launched the social media investigative unit BBC Trending. She has made TV documentaries about artificial intelligence and data privacy and her work on digital wellbeing has been added to the Irish curriculum as a learning resource for students and teachers in the Junior Cycle (GCSE).

An advocate for diversity and inclusion, Anne-Marie mentors journalists on schemes with the Second Source and WABJ (We Are Black Journalists) and she is on the European Leadership Council for the humanitarian organisation Mercy Corps. A classically trained violinist, Anne-Marie enjoys yoga and sharing a meal with family and friends in her spare time.

Ciara Riordan is an award-winning journalist, presenter, reporter and producer. The Irish native is currently a social news editor for BBC News. This involves overseeing some of the largest social media accounts in the world including the BBC News Facebook page, @BBCBreaking, @BBCNews and @BBCWorld on Twitter, the BBC News Instagram and Youtube accounts. She manages a global digital news team with hubs in Washington DC, Toronto and Singapore.

You can see Ciara presenting on BBC News digital platforms to millions of views. Her interview with Sir David Attenborough went viral when she asked him what animal would he be for a day! (Answer: A sloth!).

She has also reported live from major breaking news stories including the Westminster and Manchester attacks.

Before her current digital role, she was a reporter with BBC World TV News, a producer on BBC Breakfast TV and LBC Radio. Ciara started her career in Ireland at Newstalk radio, had her own breakfast show on Radio Kerry, worked for RTE, and even did a stint at Australia’s ABCNewsRadio.